*Note: this translation and commentary is a work in process, part of a class in Level E where I have the privilege of asking questions on the text and my approach to it with the teacher, who doesn’t hesitate to disagree here and there and throw insight.

*reading in Hebrew here vv5,6 you will see the change in the order of the nouns and verbs ‘mountains flowed’ to ‘stopped paths’

Which mirrors the other noticeable reversals in order between the Day of the LORD and the day of the false gods in Israel:

*note that 5:8 has a number of possible translations, it is often translated the opposite of this as ‘there was prosperity in the gates’ as the word ‘lechem’ is so similar to bread and occurs in this context only once. I will go into more detail on this later.

*So notice our translation could be future command or past tense:

B v.6 In the days of Shamgar son of + Jael : reversed order / reverse gods

A¹ v.12 Deborah + Barak son of /back to the day and of victory and obedience

However it is possible to zoom in on this and get:

A This day: of victory and freedom

B  Those days: Oppression

A¹ The leader arises

B¹ False gods led to the oppression

A² The leader’s heart belongs to the judges/ the leader leads, volunteers praise god

Closer Look: There are 3 Songs!

*note Barak had to stop singing in v.2 because v.3 he had no authority to address kings about disobedience and he admits in ch.4 that he can’t hear God, whereas Deborah the prophet and judge does all these things. And her song was one of leadership, away from the false gods and leading both the rulers and people back to Adonai the God of Israel, teaching them to sing his praise for the victory.

**Also 4:9 Deborah command Barak to rise, so he would not be telling her to order him.

The translations about long hair and musicians and vague singing on Deborah’s part, as well as over and back between her and Barak lose their focus from the impact of what the text is really saying, imo.

Here is a general outline, simplified, there is a LOT going on in this text: 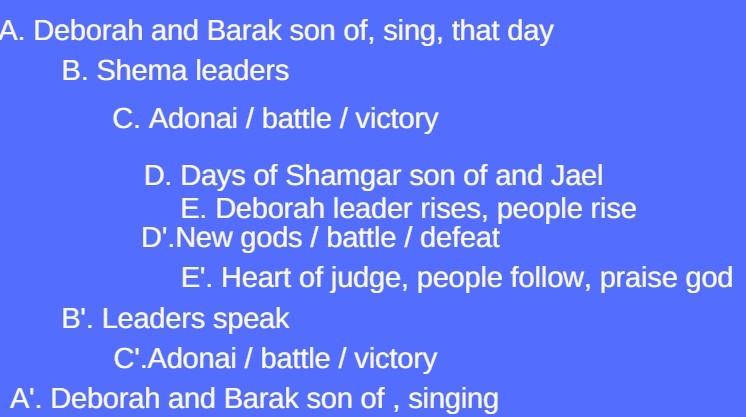 And here is a glimpse of some of the literary devices in play, but there are many many more, too dynamic to capture on paper: 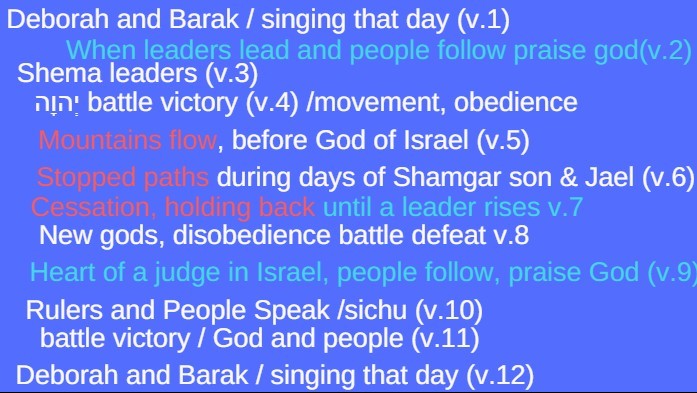 Notice the reversal in order of nouns and verbs across sentences eg mountains flowed stopped pathways, though there is more than one meaning to these it includes the basic one too.

vv.6-7: In the days of Shamgar / Jael, there was a cessation of all normal life, the highways…

vv.10-11: Riders of white asses, those who sit on carpets, and pedestrians/those who walk the paths, consider, from the sounds of the ranks/divisions/armies between the watering places, precisely there recount the deeds of Adonai and the people, and then his people went up to the gates

vv.12 Closes second paragraph Rise rise [get up is better, get up from the palm tree which is what she had to do in ch4] Deborah, rise rise give the command from God/sing your song of leadership judge, rise Barak and take your captives/fight and win, son of Avinoam

The Hebrew University of Jerusalem

The Hebrew University of Jerusalem Biblical Hebrew courses Beginners to Advanced are available online via the Israel Institute of Biblical Studies. 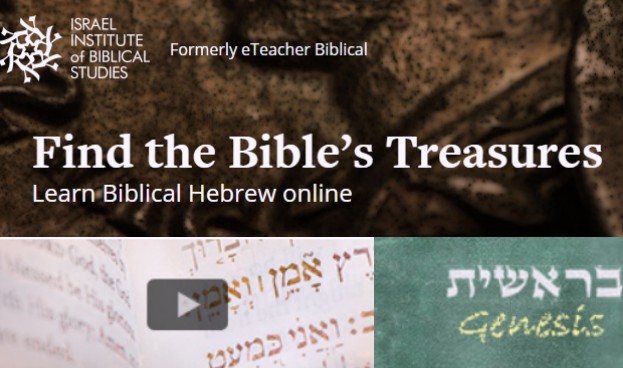 Study the same Biblical Hebrew courses as students attending university in Israel, with teachers steeped in the Hebrew bible. 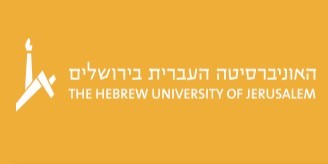 The Book of the Covenant by Joe Sprinkle

This is the book being reviewed on this site for the literary structure of Exodus, an application to law just the same as poetry in the Bible. 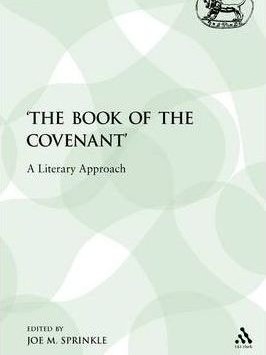 The Dynamics of Biblical Parallelism by Adele Berlin